Register Yourself Register Two or More
View Event Attendees
ULI Washington invites you to join us on May 14th for a conversation with Dr. Wayne A. I. Frederick, President of Howard University. Since taking the helm of the University in 2014, Dr. Frederick has advanced Howard’s commitment to student opportunity, academic innovation, public service, and fiscal stability. He has overseen a series of reform efforts, including the expansion of academic offerings, establishing innovative programs to support student success and the modernization of university facilities.
In addition to Howard University’s important mission as a prestigious center of higher learning, Howard is a critical community anchor in Washington, DC and a leader among HBCU’s nationwide. Join us for a moderated conversation with Dr. Frederick where he will share his vision for the University (#HowardForward), Howard’s unique role in the growth and revitalization of Washington, DC, and Howard’s plans for leveraging its real estate assets – on campus and off – in furtherance of its mission. Dr. Frederick will also discuss the important role of HBCU’s in developing future industry leaders and what more is needed to further diversify opportunities in the real estate industry. 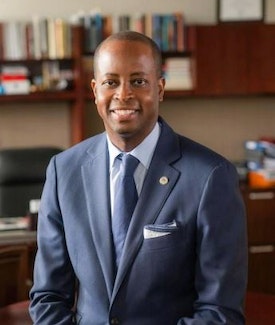 Dr. Wayne A. I. Frederick was appointed the seventeenth president of Howard University in 2014. He previously served as provost and chief academic officer. Most recently, the Howard University Board of Trustees selected Dr. Frederick to serve as the distinguished Charles R. Drew Professor of Surgery. Dr. Frederick has advanced Howard University's commitment to student opportunity, academic innovation, public service, and fiscal stability. He has overseen a series of reform efforts, including the expansion of academic offerings, establishing innovative programs to support student success and the modernization of university facilities. Dr. Frederick received his B.S and M.D. from Howard University. Following his post-doctoral research and surgical oncology fellowships at the University of Texas MD Anderson Cancer Center, Dr. Frederick began his academic career as associate director of the cancer center at the University of Connecticut. Upon his return to Howard University, his academic positions included associate dean in the College of Medicine, division chief in the Department of Surgery, director of the Cancer Center and deputy provost for Health Sciences. He also earned a Master of Business Administration from Howard University’s School of Business in 2011. Dr. Frederick is the author of numerous peer-reviewed articles, book chapters, abstracts, and editorials and is a widely recognized expert on disparities in healthcare and medical education. His medical research focuses on narrowing racial, ethnic and gender disparities in cancer-care outcomes, especially pertaining to gastrointestinal cancers. Dr. Frederick was honored with the Distinguished Alumnus Award from the University of Texas MD Anderson Cancer Center. He currently serves on the Board of Directors for the Federal Reserve Bank of Richmond, the U.S. Chamber of Commerce and Humana Inc. He is a member of surgical and medical associations including the American Surgical Association and the American College of Surgeons. In 2017, he was named “Washingtonian of the Year” by Washingtonian magazine and in 2015 was named “Male President of the Year” by HBCU Digest.
View in Member Directory Will open in a new window Dr. Tashni-Ann Dubroy serves as the Executive Vice President and Chief Operating Officer at Howard University. She currently oversees a $1.5 billion-dollar real estate portfolio, facilities management, IT, campus safety, enrollment management, auxiliary services, environmental health and safety, process optimization and University strategy. One of her first challenges as COO involved guiding the University through the recovery from a weather-related crisis that crippled the steam plant. She is now leading a sustainable steam plant modernization effort through the construction of Howard’s first Combined Heat and Power plant. Dubroy is leading an IT overhaul that includes improvement of Howard University’s core network and managing the overhaul of the University’s Enterprise Resource Planning system. Recently, under her leadership, Howard University improved its financial aid standing with the Department of Education, elevating from Heightened Cash Monitoring, level 2 to the advanced payment method. Concurrently, her team was able to alleviate repeat audit findings to benefit the University’s compliance status. She most recently served as the 17th President of Shaw University. During her tenure, she was awarded Female President of the Year by the HBCU Digest. Appointed in August 2015 during the University’s sesquicentennial celebratory year, Dr. Dubroy’s administration positioned Shaw as a resource to the City of Raleigh through entrepreneurial innovation, civic presence and support for students and surrounding communities. Dr. Dubroy’s philosophy of fiscal conservatism and institutional capacity-building made her a fast-rising star in the higher education community. In its first year, the Dubroy Administration effectively reversed six consecutive years of enrollment declines and yielded a 15 percent increase of new and returning students in 2015. That same year, the administration closed a $4 million fundraising gap which included an institutionalrecord $630,000 raised on a single night during Shaw’s annual homecoming weekend, and earned a positive change in net assetsto counteract a two-year loss – all of which earned her honors as 2017 CEO of the Year in the Triangle region. She was named to the 40 Under 40: Excellence in Leadership list by the Triangle Business Journal. She has received numerous accolades from local philanthropic organizations. Her path to the presidency was unconventional, but her leadership has been categorized as a fresh and needed vision for the sustainability of higher education in metropolitan settings. Dr. Dubroy began her career as a Research Scientist at BASF, the world's largest chemical company. She quickly ascended to the position of Global Technology Analyst, and after two years, was appointed to serve as a Chemical Procurement Manager, where she managed a strategic sourcing budget of $35 million. Prior to joining Shaw University, she co-founded Tea and Honey Blends, a hair care company that manufactured and retailed natural hair care products, and co-owned downtown Raleigh’s Element Beauty Bar. Her entrepreneurial success landed her on the pages of Money Magazine and Bloomberg’sBusinessWeek. Dr. Dubroy earned her Ph.D. in Physical Organic Chemistry from North Carolina State University in 2007 and holds an MBA from Rutgers University. Prior to her C-suite appointments, the Shaw University alumna served as Special Assistant to the President, Chair of Shaw University’s Department of Natural Sciences and Mathematics, and as an Associate Professor of Chemistry.
View in Member Directory Will open in a new window

ULI Washington: A Conversation with Howard University President, Dr. Wayne A. I. Frederick